I planned a sybaritic summer in a Turkish village by the sea. I didn't consider that I might have trouble fitting in. 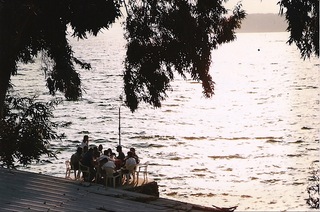 Neighbors gathering for a gossip. Unfortunately, I had no idea what they were saying. Photo by Mary D'Ambrosio

As soon as I looked up at the enormous carved wooden balcony, and thought of how the Aegean would look through the olive grove, I knew I had to have the house.

"It's a family house. It's not available," said the young owner, Mehmet, as we all trooped to the patio—Mehmet's sister, brother and cousins, one of whom had brought me here to G., a languorous seaside community on the Bodrum peninsula in southern Turkey, where I hoped to spend the summer. Everything felt steamy and overripe, from the vermilion bougainvillea dripping from the window ledges and the champagne roses bursting from the hedges to the well-heeled women who drifted by wearing great wafting lavender caftans and beaded chemises, and swimsuits that would never touch the water. A black-and-white tiled promenade lined with antique lanterns hugged the water's edge for perhaps a quarter mile in each direction, passing cafes, family pansiyons, a grocery kiosk and white stucco summer cottages with red-tiled roofs, some with wooden gullets and yachts docked out front. My house was not mentioned again.

Waiters materialized with aluminum pots of spicy bass stew, and iced white wine. There was laughing conversation in Turkish, of which I understood not one word. A man at the next table took out his saz and began to play a mournful tune, and everyone sighed and rocked to the rhythm of the waves breaking lightly against the shore.

The sun was melting over the water, and I was drunkenly certain I was sitting in Earth's sweetest spot, when Mehmet's cousin Meltem turned to me and said, without a hint of liquor in her voice, "Wouldn't you like one of the smaller apartments? That would be more like the price you want to pay."

I shook my head. I was helpless. They knew I had fallen in love with the balcony house. Was it already obvious that I was a conspicuously lousy bargainer, the one who, in the Arab markets in Jerusalem, had agreed to exchange my last shekels for a dancing belt made of Bedouin silver—the silver that never tarnished? (Within six months the belt had gone gray, hanging in the back of my closet and never danced in once.)

Mehmet, whose nickname was "General," laid his heavy hands on the table and casually named an enormous sum. The group went silent.

"That's much more than I can afford," I said, struggling awake.

"How much do you want to pay?" Meltem asked.

I offered a third of that. Everyone laughed. I realized how foolish I'd been not to have brought my own negotiators.

After two more days of raki drinking and monosyllabic arguing, during which I was sent to sleep in the unavailable apartment, we agreed upon a price that I protested was wildly inflated, and that Mehmet claimed would bankrupt him. But we both knew that, at $500 a month, we'd each made a brilliant deal, far less than I'd pay for such a house in a more famous part of the Mediterranean, and more than he could get from some Turk who easily might turn out to have "Sultan" or "Warrior" for a nickname.

Maybe because I'm only five feet tall, I've always gravitated toward balconies. Not only can they inspire great thoughts and inner peace, but they lend a commanding height. At first, enamored, I took dozens of photographs of the view: the turquoise sea at sunrise; the sailboats piloted by weekending Istanbullu who had managed to rouse themselves to exercise; my neighbors enjoying grilled mullet and börek at tables covered with red-checked cloths on the pier, their (unintelligible) conversation wafting up to me.

Of course, one never thinks, beforehand, of intangibles. Had I considered that, in such an intimate place, I would need to find a way to fit in? I hadn't. In New York one automatically fits in through one's work, or if not, is still free to live in one's own peculiar way, isolated perhaps, but attracting neither attention nor interference. This proved impossible in G., a communal place where few foreigners had stayed. I became a curiosity and an amusement. Not only was my Turkish incomprehensible, but word got out that I was childless and couldn't properly cook. In a country where the most important jobs of women are childbearing and food preparation, this made me a nobody.

Contributing was hard. My quick pastas and grilled vegetables were often met with silence. Worse, people sometimes refused to touch them, claiming they were "full." I eventually figured out what was wrong: My output was shoddy, and insufficiently complex, in the eyes of women trained in the exacting preparation of recipes invented in Ottoman times. Their dishes could take all day to make—the longer they took, the more they impressed—and were passed down from mother to daughter with strict emphasis upon accuracy, like oral history. Even things that seemed safe might not be, I discovered the day I took ice cream to a dozen neighbors drinking tea and playing cards on the patio, and was asked, "Is this homemade?"

And so a gulf yawned between my neighbors and me, and I often experienced G. by looking down. Until then I hadn't considered some of a balcony's less salutary aspects, such as its distancing powers. Kings and queens may have used balconies to intimidate their subjects, but I felt more like a conspicuous curiosity. On bad days I likened myself to Rapunzel, trapped upstairs and cut off from love.

Each day a procession of food-related activity passed below. In the morning there was the simit vendor—the tray on his head piled high with hard-baked sesame rings. In the afternoon came the man who sold midye, mussels painstakingly stuffed with saffron rice. All day, women hiked energetically past in the midsummer heat, hauling eggplants and tomatoes and zucchini from the outdoor market a quarter mile
down the shore. At sundown, Mehmet and his brother Sunay would barbecue köfte—flattened meatballs they'd kneaded for two hours beforehand with bulghur and spices—for their guests. On Sunday, food production reached its zenith. That's when Mehmet's sister Gulay made manti, hand-rolled meat dumplings, eaten with yogurt, mint and chili pepper-infused butter sauce. The whole neighborhood would pile into the cafe, the cook standing by in a triumphant sweat. Guiltily, I ate.

No doubt it was said behind my back that the reasons for my lack of a husband were perfectly clear.

One morning I had an idea. I laid out fresh sesame bread, butter, honey and black olives. I cut slabs of feta. I put the aluminum teapot on the stove and set fluted tea glasses on their red and white striped saucers. Perfect Turkish breakfast: no cooking required.

I carried everything out to the table on the balcony and, as my neighbors passed, I called them up to snack. From that day on we spent many companionable mornings up there, talking, after a fashion, a Turkish-English dictionary between us. And my pleasure in the balcony was magnified.