Worldpress
January 6, 2015
The railroad that bridged German and Italian Switzerland was meant to unify the nation. Up close, the story looked a little different. 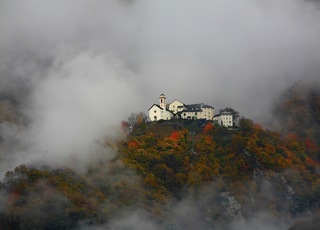 A convent in the hills above the Swiss Italian city of Bellinzona. Photo by Ely Riva

I'd always admired a romantic picture on the wall of my uncle's house, depicting a fanciful train journey across Switzerland. Really, it was an elaborate train schedule, from 1904, advertising summer vacation service. More marketing piece than utilitarian timetable, it was festooned with illustrations of ladies and gentlemen dining in plush carriages, wearing plumed hats and bowlers, the sort of people who would travel with substantial luggage.

"The shortest and most picturesque route," the flyer promised. Passengers were promised a journey of pampered luxury, as they traveled some 90 miles through the Alps, from German-speaking Zurich to the lake region in the Italian cantons of Ticino, where my Uncle Waldo grew up.

My uncle's hometown has an airport now. "But I always take the train," he confides. A fellow romantic, he liked to toss rose petals instead of rice at weddings, and at our suburban Long Island barbecues would serve digestifs, the silver cart bumping awkwardly over the lawn.

By train, he could savor the journey, which was not only beautiful, but historically significant. The line had bridged a frustrating chasm that divided German and Italian Switzerland, unifying a tiny country surrounded by sometimes hostile and definitely better-armed powers. It put sensible Germans and unreliable Italians, for better or worse, literally on the same side.

What a great story, I thought. So I was thrilled when I learned I'd have a chance to ride the train myself.

Arriving in Zurich, you immediately understand how deeply the Swiss revere their trains. The mammoth central station is situated, and decorated, like a palace. It occupies a prime position at the foot of the main shopping street, and is fronted by a grand fountain and decorated with classical figurines and national flags. It even has its own angel protector.

The train my mother and I are about to board is the country's most important. Finished in 1881, the St. Gotthard connected the wealthy and powerful German majority in the north with the poor Italian districts in the south. "The train that unites," the Swiss still call it. We see the slogan painted, in Italian, on the side of each rail car.

We leave the city on a rainy summer day, settling into a second-class cabin that, though lacking velvet seats and waiters, is nonetheless comfortable and pleasant. We're soon plunged into a misty landscape of farms and pines. Through the open windows, we hear the creeks rushing through the ravines. In the time it takes me to travel by subway from Brooklyn to Manhattan, we reach the mountains. The icy peaks seem to pass right by our heads. I walk from window to window, trying to photograph most impressive views. But the mountains have a different effect on my mother. She's inspired to begin telling me the story of my uncle's life.

When his parents immigrated to the United States in the 1930s, they'd had to leave their eight-year-old son behind. My uncle Waldo grew up in a convent, where the nuns had taught him to sew. After joining his family in New York as a teenager, he worked for many years as a tailor (and, like many Ticinese, a waiter). He sewed his way through graduate school, sewed for a living right up to the time he become a professor of economics.

We're headed into the poorest part of Switzerland, one that tens of thousands of people left during migrations that lasted some hundred years, well into the 20th century. The Swiss Italians left, just as the Italians had. I realized that this was a story I hadn't heard.

In less than two hours we reach the St. Gotthard Pass, the scary mountain chasm that gave this railroad its name. This pass has been mentioned, with horror, since antiquity. For centuries, no one could cross it. A rickety bridge was finally hazarded in 1220. Even then, only the most desperate or reckless pilgrims and traders dared test it. "The Devil's Bridge," people call it, after the famous legend linked to it.

When the poet Frederick Schiller wrote about this pass in 1799, crossing was still wildly dangerous. Mule trains would labor and teeter over the precarious span, and could cross during only a few temperate months each year, threatened by avalanche and a spitting surf. The territory on the other side still belonged to Italy.

O'er the abyss goes the dizzy way,
It runs between life and death;
For the giants bar it,
The lonely way,
With a deadly threat in their breath.

By the mid-19th century, with the Kingdom of Italy and the German Empire expanding their power, Switzerland wanted to draw its ethnically Italian cantons closer. A railway, to be laid through a tunnel blasted through the mountains, would accomplish that.

Many people derided the plan as a quixotic and extravagant folly. Most of the laborers were Swiss Italian, and Italians from Italy.

More than 200 workers died during the construction, maimed by train accidents or drowned by inrushing water. There were violent strikes, one of them put down by the Swiss Army. When it was finished 10 years later, the St. Gotthard Railway Tunnel was just over 9 miles long—the world's longest rail tunnel at the time. Today, the laborers are lauded as heroes. My uncle owns an elaborate coffee-table book celebrating the construction. Written in Italian, it features many pictures of hale laborers posing and socializing.

Rounding a curve, we see the mouth of the tunnel. We grip our armrests. The world abruptly goes black.

Twenty nerve-wracking minutes later, we emerge into a burst of sunlight. I silently thank the Italian workers, for providing such an uneventful ride.

"Airolo," the conductor calls, naming the first town in Ticino. Everything now shifts seamlessly into Italian, from the conductor's announcements to the signs outside. Hearing a language we understand, my mother and I relax.

We disembark at Bellinzona and, seeing the palm trees and colonnaded walkways, feel we are in Italy.

My uncle's childhood friend Bruno meets us at the station. Courtly and correct, he takes my mother's shopping bag, and leads us up the hill to the city's main attraction: the ancient Bellinzona castle. In my daydreams, I'd supposed "Bellinzona" meant "beautiful zone." But I discover that the name derives from the Latin "bellus"—Holy War.

Bellinzona has been a strategic gateway to Italy from the Alps since Roman times, warred over for most of modern history. The city-states of Como and Milan battled over it in the 14th and 15th centuries, before France swept in in 1499 and took control. The locals weren't having any of that. They rebelled, drove out the French, and applied to expanding northern neighbor Switzerland for protection. In 1803, Bellinzona became the capital of the new Ticino canton, that title rotating democratically with the nearby lake towns of Locarno and Lugarno, until Bellinzona was named the permanent regional capital in 1878.

Today it's a rather lugubrious workaday city of 18,000, with four hulking castles fortified by old warring families, but no sparkling Swiss lake—and therefore fewer vacationers. It's fair to say that its main attraction is war. Bruno, who is in his early 80s, had been a tailor, and he too had shared in the war economy. His large shop had made uniforms for the Swiss Army.

Though they've never met, Bruno and my mother fall immediately into a reminiscing conversation about life here in the 30s, when both were children. Bruno speaks of the poverty, the limited diet and the hard times that drove my uncle's family, and tens of thousands of other Ticinese, to emigrate. "It was milk and polenta, polenta and milk," he recalls. Yet he admits that he eats, and even enjoys, the same meal today.

My mother was born in the United States, and her mother in Sicily, a thousand miles south of here. So Bruno and I are both astonished when she begins to sing:

The lines come from an old military song, written to memorialize a famous WWI battle in which Italy's Piave River mythically rises to repel the Austro-German attackers. And suddenly we're having an impolitic conversation about kicking out Germanic invaders. My mother had learned the song as a girl in the Bronx, listening to Italian radio.

Of course it was mainly the Swiss Germans who traveled on the St. Gotthard, both in the time of the flyer and in my uncle's time. The fares of the wealthy paid for at least a quarter of the train's operating costs, explaining why so much effort had been invested in publicity. The train allowed the tourists to discover this folkloric part of their country, and to enjoy boat trips and eat polenta as a novelty, while the peasants picturesquely milked their cows in the background.

Meanwhile, most of my uncle's people left, had to leave. While it may have united, the train didn't distribute too much prosperity—at least not enough to keep Switzerland's Italian citizens at home. Yet I'm glad my uncle has memorialized the St. Gotthard behind glass. If not for his romantic gesture, I would never have made the journey, or learned about his.

Mary D'Ambrosio is an assistant professor of journalism at Central Connecticut State University, and the founding editor of Big World Magazine.